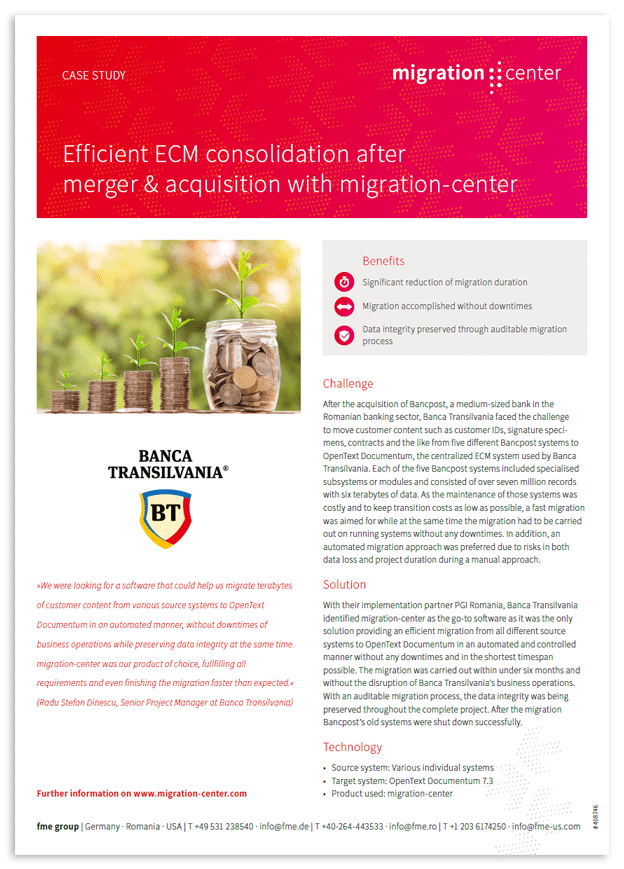 After the acquisition of Bancpost, a medium-sized bank in the Romanian banking sector, Banca Transilvania faced the challenge to move customer content such as customer IDs, signature specimens, contracts and the like from five different Bancpost systems to OpenText Documentum, the centralized ECM system used by Banca Transilvania. Each of the five Bancpost systems included specialised subsystems or modules and consisted of over seven million records with six terabytes of data. As the maintenance of those systems was costly and to keep transition costs as low as possible, a fast migration was aimed for while at the same time the migration had to be carried out on running systems without any downtimes. In addition, an automated migration approach was preferred due to risks in both data loss and project duration during a manual approach.

With their implementation partner PGI Romania, Banca Transilvania identified migration-center as the go-to software as it was the only solution providing an efficient migration from all different source systems to OpenText Documentum in an automated and controlled manner without any downtimes and in the shortest timespan possible. The migration was carried out within under six months and without the disruption of Banca Transilvania’s business operations. With an auditable migration process, the data integrity was being preserved throughout the complete project. After the migration Bancpost’s old systems were shut down successfully.

“We were looking for a software that could help us migrate terabytes of customer content from various source systems to OpenText Documentum in an automated manner, without downtimes of business operations while preserving data integrity at the same time. migration-center was our product of choice, fullfilling all requirements and even finishing the migration faster than expected.” Radu Stefan Dinescu – Senior Project Manager @ Banca Transilvania